D.T. Slouffman isn't just a storyteller.  He is...

the Mission is simple. 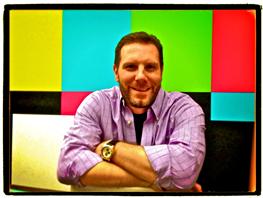 D.T. is a broadcast media veteran whose career began at the ABC television network with roles on many top productions such as Wide World of Sports, Monday Night Football, and the Bowl Championship Series.  He created 21 Productions in 2001 to relaunch his career as a contract producer, writer

and director for the likes of TLC, TNT, TBS, NBC/Universal and CBS among other networks and production companies.  His hard work is manifest in projects like the documentary Scandal on Thin Ice for Lifetime Television, a series of features for Champ Car Productions focusing on actor Paul Newman's second career as an IndyCar owner, the Discovery Channel's Rebuilt: The Human Body Shop and the reality game show Dream Job for ESPN Original Entertainment.

D.T. is a terrific feature producer both in long form and short form work.  His work is always creative, well planned out and well edited. I would highly recommend D.T. for any project.

"In the beginning..."  Every story has one, along with a middle and an end.  D.T. Slouffman knows how to get out of the way and let these foundational elements unfold.  Conflict plays out, consequences are revealed and the truth comes through.

His standards are high. D.T. has been nominated for a dozen Emmy Awards, claiming five wins. Put him to the test, and you'll get an excellent product.